Route 606-Reston LLC announced today that it is about to begin construction of The Garrison, a 45 acre mixed use development on Garrisonville Road (Route 610) at its intersection with Travis Lane in Stafford County, Virginia. A groundbreaking ceremony is scheduled to take place on the property at 11 am on October 18, 2021. Opening of the project’s first phase is planned for Spring, 2023. The developer is an affiliated entity of The Pence Group which developed the 800,000 square foot Stafford Marketplace Shopping Center at Garrisonville Road and Interstate 95.

“This is a proud day that we have looked forward to for some time,” remarked Supervisor Mark Dudenhefer, Garrisonville District. “We believed in The Pence Group and now proudly announce the ground-breaking of ‘The Garrison.’ This mixed-use community represents the next level of entertainment, premium shopping and dining options for our community.” 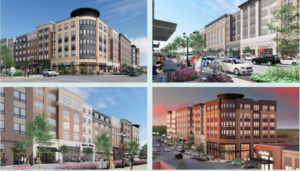 The project architect is Bignell Watkins Hassar which also designed Stafford Marketplace. Civil engineering services are being provided by Urban Engineering. L. F. Jennings, which acted as the general contractor on Stafford Marketplace, is providing general construction services. Approvals from the Army Corps of Engineers and the Virginia Department of Environmental Quality are in hand. The site plan has been approved and receipt of the grading permit is expected by October 22. When fully constructed, the project will also include a new extension High Point Road from Garrisonville Road to its existing terminus west of Mine Road. The developer, in conjunction with others, has already completed major widening and road improvements in the vicinity of the project. There will be a new, fully signalized intersection at the main entrance to the project.

Since 1976 The Pence Group has developed more than 35 projects in the Mid-Atlantic and Southern California markets. It also operates, through an affiliate, the Dulles Expo Center in Chantilly, Virginia.